I’m going to go out on a limb straight away, and declare this one of my favourite books of 2021: it was one of those rare books that I kept thinking about while I wasn’t reading it, and couldn’t wait to get back to when I had some reading time. It’s an absolute cracker, and I’m excited to tell you why. 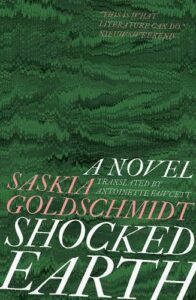 Shocked Earth is the story of a farming family in Groningen province. We meet three generations of the Koridon family: Zwier, the grandfather, a quiet and undemonstrative man who nonetheless is capable of deep affection; Trijn, his daughter, who never wanted to work on the family farm but after an ill-fated bid for freedom returned and never left; Femke, Trijn’s daughter, who wants to move into organic dairy farming but meets intransigence from her mother. After some background about Trijn’s childhood, her disastrous bid for independence via an ultimately abusive relationship with Femke’s father and her subsequent return to the family farm, the main focus is on Femke in more or less the present day. Femke wants to turn the farm into an enterprise that will “work with nature rather than against it”, while Trijn is adamant that this would be a sure path to financial ruin, and Zwier is reluctant to abandon the traditional methods that have shaped his life’s work. Femke is introverted and reserved, but when she meets Danielle, an “offcomer” who shows her what desire is, it is “as if a small animal had broken free inside her.” Needless to say, Trijn is about as enthusiastic about Femke’s romantic choice as she is about her plans for the farm, and the two women skirt around each other with shards of resentment and unarticulated reproaches constantly driving between them.

As well as the generational conflict, there is an ever-present threat in the form of quake damage caused by gas extraction: the government has realised that it can make a significant profit from gas that has been discovered beneath the clay lands, yet refuses to acknowledge – let alone compensate – the damage to lives and livelihoods caused by its actions. The Koridon family has lived in fear for five years, ever since “that evening when the joists and rafters cracked and the tea whirled in the cups, that evening when the floor tiles cracked, the ceiling lamp lashed wildly back and forth, and the pull bell moaned as if the devil himself was shaking it,” and yet the painfully slow process of trying to get official recognition of the damage they have suffered is stymied by bureaucratic red tape and administrators doggedly insisting that the farm is subsiding owing to poor maintenance. The threat of the next quake hangs over the narrative, and when it comes it’s going to turn the Koridon family’s lives upside down (more than once).

The two main threads – tension within the family and the threat of losing the farm – are delicately interwoven throughout. The family’s story is also closely connected to the land, and so to questions of ecological sustainability and damage to the earth. This is a book that is simultaneously about big issues and everyday people, and in which profound truths appear when you least expect them, whether in Zwier’s comment to Femke that “People always need to make others feel smaller. So they can look bigger” or in Goldschmidt’s observation in a particularly harrowing episode that “too much importance is placed on money and not enough on care … the individual is defeated by the system, compassion by self-interest, imagination by inflexibility, quietness by tumult, love by fear, humanity by cruelty”). And if the frustration with the administrative procedures, the inability of the Koridons to articulate their emotions when it most matters, and the disappointing behaviour of the minor characters are not enough to draw you in, you can also look forward to a Dead Bird Museum, a rebellion, and an unexpected outcome when a law is inadvertently broken. The thing that pulled me in most, though, was the heart of the story. Despite the characters’ coldness and their difficulty expressing emotions, and despite the almost unremittingly bleak landscape, Goldschmidt manages to make Shocked Earth full of warmth and feeling. It takes quite a lot for me to cry at a book – welling up isn’t so rare, but needing to put the book down because I can’t see the pages through my tears doesn’t happen often (The Eighth Life and The Little Girl on the Ice Floe are recent exceptions) – but there was one part when I wept so much my seven-year-old daughter got out of bed to check I was okay. No spoilers, so I’ll just say that it was page 266, and hope you read it for yourself.

Antoinette Fawcett’s translation is extremely accomplished – the ominous threat is delicately conveyed throughout, as is the tension in the farm, and in particular Fawcett excels at describing the sights and sounds of the countryside in all its lowering greyness (and occasional Spring promise). While at times the descriptions are poetic (“Then she pushes the barrow down the lonning. The sweet, heavy scent of May blossom and cow parsley, the magenta-coloured clover flowers and purple foxtails, the great tits twittering in the poplars, the yellow wagtails on the fields, the meadow pipits yoyoing, the swallows skimming along the ground, the crows cawing, and the soft summer breeze all pass her by”), at others reality crashes in (“The sharp stench of cow shit announces the spring”). The range of farming vocabulary is admirable (and, for this urban reader, extremely instructive) and the tone is dramatic enough to convey the immensity of both the landscape and the situation, but stops before getting mawkish (“And high above this apocalyptic scene, where a hundred and fifty years of history is being guzzled down, bite after bite after bite, a buzzard is circling, mewing, lamenting”). There are a couple of expressions I found a little odd (a dog’s tail “wagging without cease”, and the slightly awkwardly formulated question “what do you take in your coffee?”), but these were so few and so minor that they did not detract from the evocative and detailed storytelling. I also really appreciated the translator’s note at the end, which engages carefully with the importance of context to linguistic choices; Fawcett also makes an observation that strikes me as getting right to the heart of why this book is so moving: “the fate of one particular family in a remote corner of the Netherlands is absolutely linked into the fate of humanity as a whole.” I may have little in common with Zwier, Trijn and Femke, but the problems they face – personal and political – are the problems of humanity, and this book’s humanity is precisely where its power lies.

This review was first published at the Translating Women blog