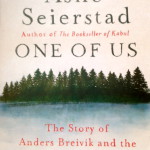 During the Open Book Festival in Cape Town I attended a meeting: Writing Big Events with Asne Seierstad, Mandla Langa, and Neel Mukherjee. Steve Connolly interviewed the three writers from very different countries and backgrounds. All three covered in their book a historical period or occasion. The common ground of the three totally different books is extremism. I think that today, while politicians and governments tend to answer the extremist deeds of terrorists with extreme violence, it is more important than ever to read and learn about the different faces of extremism.  If we refuse to learn from history we are deemed to make the same mistakes over and over again, which is what we do. Today a description off and some thoughts on Asna Seierstad’s One of us.
Asna Seierstad is a Norwegian journalist, who was always  covering stories from the Middle-east and didn’t think of her homeland as a place to write about. But in  One of Us she did. Minutely she decomposes what happened before, during and after 22 July 2011 in Oslo, the day that Anders Behring Breivik killed 69 kids and 8 grown ups. END_OF_DOCUMENT_TOKEN_TO_BE_REPLACED

The Book Launch is a bookstore in the centre of Cape Town, founded by Mervyn Sloman, who did not listen to the discouraging advice of his former colleagues at the publishing house where he was working. He opened his Book Launch in 2007. END_OF_DOCUMENT_TOKEN_TO_BE_REPLACED